EACD Webinar Report: Communication in an age of COVID-19 – What can we learn from existing data?

Nearly 140 participants logged in to our most recent webinar on Friday, 27 March on Communication in an age of COVID-19 – What can we learn from existing data?, led by Phil Riggins, founder and CEO of the Brand and Reputation Collective (the BRC).

In addition to reviewing existing data, instant polling during the webinar gave us the first snapshot of how communicators are today experiencing and managing the impact of the crisis on their work and wider organisations.

This instant polling was then discussed and contrasted with the findings of deep-dive research with senior communicators carried out in 2018 by the BRC and the EACD, on corporate communication in an age of radical uncertainty [full report].

For example, previous results found that radical uncertainty was leading to much more pressure on their teams, leading them to be more reactive (32%), with nearly as many saying that it was making it more difficult for them to communicate and engage/have an impact (25%). 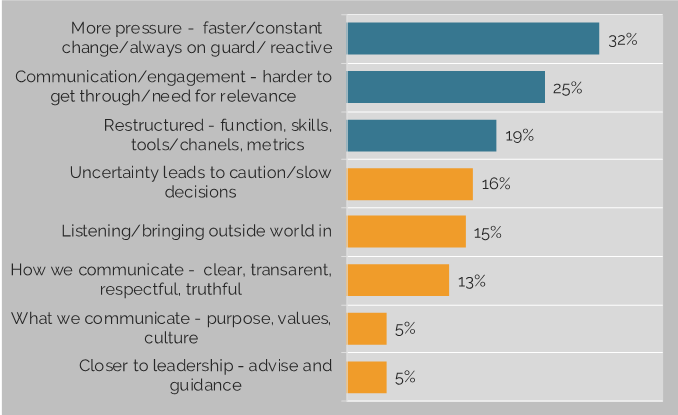 Source:  Building a culture of purpose:  Corporate communication in an age of radical uncertainty (2018)

How has Covid-19 changed that?

The webinar participants were first asked how they would best describe their organisation’s communications during the crisis. The online poll was anonymous and two-thirds (67%) agreed with the statement that they were ‘riding the wave, taking things as they come’, while 31% admitted to being ‘headless chickens’ and 5% ‘a deer in headlights’. However, 25% claimed their organisation’s comms response was ‘a well-oiled machine’.

Put another way, 57% thought their communications team was ‘somewhat well prepared’ to deal with the crisis, with just over a quarter (27%) saying they were ‘not so well prepared’. At either end of the spectrum, 7% claimed to be ‘very well prepared’ and the same percentage ‘not at all prepared’.

In the 2018 findings, 92% of respondents and interviewees thought that consumers and stakeholders’ expectations had changed over the past few years. This was characterised as consumers and stakeholders wanting to see purpose with proof. They expected greater transparency and openness and wanted instant responses to their issues and concerns. They also wanted to see leadership and authenticity from organisations when it comes to addressing wider social issues and to be able to play a greater role in developing everything from products to policies to purpose.

The webinar participants concurred that consumer and stakeholder expectations have changed because of the COVID-19 crisis (87%). In fact, the majority of participants (61%) thought that the impact of the crisis on people’s expectations of brands/companies are likely to be permanent after the crisis ends rather than return to what they were before (39%).

So, if radical uncertainty remains and is possibly heightened by the COVID-19 crisis, what is the antidote?

Our 2018 research found that communicators thought that having clear values – and to be seen to be living by them – is key to being credible, relevant and compelling to consumers and stakeholders (64%). This was followed by the importance of having content that is relevant and compelling and which resonates at a human and emotional level with their audiences (55%). Other critical factors were transparency and openness (32%), listening and engaging in a real two-way dialogue and co-creation process (27%) and aligning values and behaviours (27%).

In essence, the antidote is creating a culture of purpose: 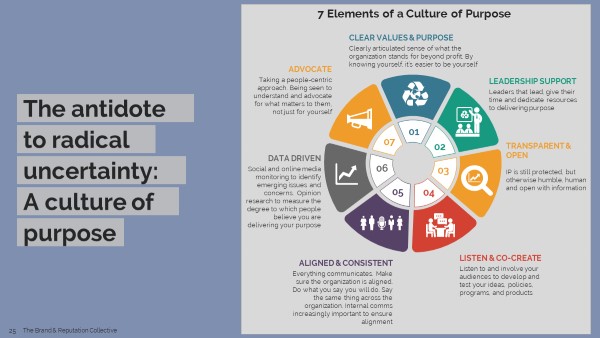 Leadership is also key: communicators want their leaders to lead, help them create a purpose and strategy and be seen to walk the talk. Comms teams needs the freedom to experiment, the budget to tell the story and the resources to execute.

Some of the webinar participants’ viewpoints:

Kim Larsen, Managing Vice-President and Acting President of EACD and EVP Communications at Danske Bank, believed the added pressure of Covid-19 could eventually allow an opportunity for real sustainable changes in how we all look at the world, with more emphasis on community and bottom-up approaches and the role of meaningful leadership – what it should be – coming to the fore. One positive move has been towards people trusting facts, scientists and experts again, rather than politicians, which could lead to greater trust again in social institutions.

Andrew Hillier of Ballinger Equine was more pessimistic about the human tendency to regress to the mean and reinforce previous habits, while Maria Isabel Soldevila Brea of the Université libre de Bruxelles (ULB) hoped it would foster a drive to build more community.

Rod Cartwright observed that from a behavioural psychology perspective we were following the grief cycle, from being frozen with shock, through denial and now trying to make sense of it all. Ultimately, human empathy will be key to how we survive as better organisations.

Inge Wallage, EACD’s Advisory Director, echoed the trust issue which becomes magnified in a crisis. How will this affect value chains? Will we be more likely to trust local rather than global as the flaws have been more clearly revealed in the ‘global community’?

So many questions and viewpoints were raised that there was not time to include them all or to get deeper into the ones that were brought to the fore. Inge will, therefore, be facilitating an EACD Dialogue webinar on Friday, 10 April at 12.30 CET to pick up on the many viewpoints that were raised and discussed. It is another opportunity for EACD members to convene online and share views and issues with one another. Find out more about Inge’s approach HERE

Register HERE to join the conversation.