From 90% fossil fuels to 90% renewables: the Ørsted transformation story

Posted on in
Communication Director

Real corporate transformation starts with having a clear and consistent long-term vision of what the company wants – and needs – to become, coupled with a deep understanding of its role and responsibilities in society. It calls for strong leadership to keep the whole management team, employees and stakeholders engaged with the process. Above all, it takes time and the courage to persevere.

These were some of the key lessons shared by Jakob Askou Bøss, Senior Vice President Corporate Strategy & Stakeholder Relations at Danish energy giant Ørsted, during an online keynote presentation to EACD members on 15 May. His dual role straddling both strategy and stakeholder relations, which includes communications, public and regulatory affairs, marketing, branding, and corporate positioning/communications, has given him invaluable insights into both the business realities and the brand challenges.

Very few companies have undergone such a truly comprehensive 360º turnaround as Ørsted – and accomplished it successfully in little more than a decade. In a detailed and insightful review, Jakob outlined the key thinking and steps that shaped the company’s black to green energy journey and the daunting obstacles encountered on the way.

What seems inevitable with hindsight was almost inconceivable at the beginning, but has since become a startling reality:

In 2004, when Jakob joined the company, over 90% of Ørsted’s core business was based on fossil fuels…

How did such a fundamental shift come about?

In 2006-2008, it was becoming clear that a business based purely on fossil fuels was not going to be sustainable, either economically or environmentally. The game changer was the preponderance of scientific evidence emerging, from Al Gore’s Inconvenient Truth and the Stern Review to the landmark findings the following year by the IPCC (Intergovernmental Panel on Climate Change) that global warming was almost certainly due to mankind’s actions. This led in 2008 to the EU agreeing legally binding 20-20-20 targets (a 20% reduction in CO2 emissions, a 20% increase in renewables and a 20% improvement in energy efficiency by 2020).

Even among its main competitors at the time, Ørsted’s forerunner (DONG – Danish Oil and Natural Gas) was among the most intensively dependent on fossil fuels and responsible for emitting one-third of Danish C02. It was becoming increasingly clear that it was going to be strongly impacted by growing environmental and policy pressures.

The company needed to rethink, and radically.

An op ed by the Ørsted CEO in a leading Danish newspaper kickstarted the evolution by announcing the change of strategic direction and this was backed up by a corporate communications campaign to underline the company’s commitment to transforming to clean and reliable energy.

However, in 2012 the company came under intense financial pressure due to a number of factors in the European energy markets. Operating profit dropped by almost 40% and credit metrics deteriorated rapidly (where banks feel that too much debt is being carried relative to earnings.)

This forced a further rethink. ‘What is core, what do we want to focus on?’

At that point offshore wind accounted for only 8% of the company’s earnings and was much more expensive than many other energy sources. The company took the strategic view that the price would come down with increased capacity roll-out and they could see a value-creation potential as well as a differentiation from competitors. However, it was a huge potential gamble that took nerve and foresight to deliver. The core businesses were reduced from 12 to 4 to allow faster focus on renewables and offshore wind.

The strategy paid off:

Ørsted has now reduced fossil fuels by over 90% while doubling operating profit and return on capital employed (ROCE). Its business is now predominantly international with 80% of earnings coming from outside Denmark.

It is on target to be fully carbon neutral by 2025.

The brand and communication journey

However, this rosy view masks a prolonged image crisis that the company had to deal with from 2012-2016 which, at its lowest point, saw it fall to 95th place out of 100 in a ranking of corporate reputation in Denmark.

There were two primary causes: the firing of the CEO in 2012 in circumstances which had a ripple effect in corporate Denmark, and a large capital injection from Goldman Sachs which caused a political backlash as the company was then more than 80% owned by the Danish state. The perception grew that Goldman Sachs was plundering the Danish state as the company stake had been sold too cheaply. This was untrue but very difficult to counteract in the public debate.

For four years, there was near constant crisis management while trying to implement the green transformation. Due to the negative perceptions of the company there was no bandwidth with stakeholders to acknowledge the fundamental changes the company was undergoing. This situation continued until two major decisions were taken: to divest the company’s oil and gas businesses entirely, which was completed in 2017, and which then allowed for changing the company’s name from DONG to Ørsted to reflect the new green reality of the business.

The rebranding process took two years, with more than 1,000 people working on the project in secrecy. Ørsted was finally chosen, out of 3,000 names considered, as he was a pioneering Danish physicist who 200 years ago had discovered the principle of electromagnetism which underlies all electricity production in power plants and wind turbines. His visionary approach encapsulated what the company was trying to achieve.

This was all part of a deep and long process to agree the company’s core purpose. 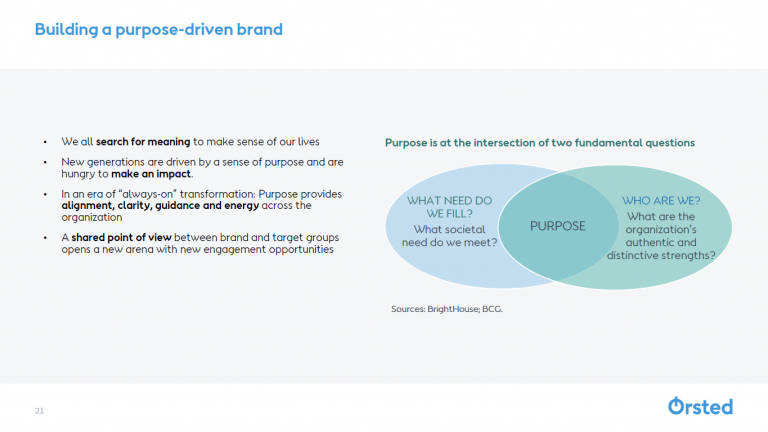 A purpose-driven brand has a lot of transformative power: it commits everyone to achieving the company’s goals and to beat their own targets, whether as stakeholders or suppliers. But to be credible it must be backed up by tangible proof of targets met, divestments made and sustainability metrics achieved, as part of an ongoing process of improvement.

The company’s purpose could now be distilled to the core vision:

Let’s create a world that runs entirely on green energy.

Once that was in place, a clear, aligned narrative could drive the brand transformation. 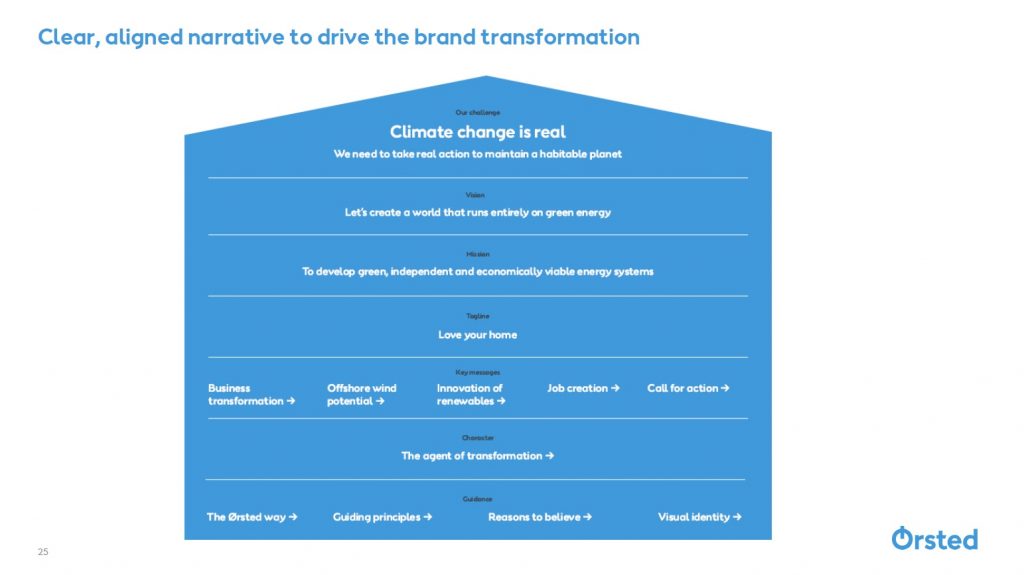 Two recent accolades are testament to the fundamental transformation Ørsted has undergone and is still seeking to embody:

The presentation prompted a lively discussion with questions ranging from how to overcome internal resistance to such fundamental change, to the importance of the CEO as a change agent, what set Ørsted’s successful strategy apart from BP’s failed bid to move ‘Beyond Petroleum’, and dealing with objections to green infrastructure as the sector continues to flourish.

On overcoming resistance to change, Jakob acknowledged that there had been internal tensions to such a revolutionary upheaval. The key was having the determination of the CEO and senior management to drive the strategy, and the opportunities that could be offered to employees to work in the new renewable energy business, particularly as the fossil fuel-based business was shrinking.

In BP’s case, it was clearly not enough to have a vision, it must be backed up by an investment strategy and the business traction to follow it through.

The CEO role is critical. They have to be not just professionally accomplished but also politically astute to handle societal expectations of leadership. It’s about balancing the visionary and the pragmatic and contributing to improving society, as Ørsted’s CEO Henrik Poulsen has noted. His role in leading a high-level government working group on reducing carbon by 70% by 2030 is one example.

Another issue raised was the resistance to the installation of wind turbines and solar panels onshore as people do not want to have them too near their homes or spoiling country views. As the renewables sector grows the number of installations will increase and managing these societal and business tensions will be an ever greater challenge.

Offshore wind mitigates some of these challenges, but the oceans and marine life still need to be protected. Ørsted is looking at ‘co-habitation’ solutions to minimise the impact of offshore wind farms on marine life, but this is at a very early stage. Could floating wind structures be an answer, one participant suggested? They are not fixed to the seabed unlike conventional offshore wind platforms. However, Ørsted considers them currently too expensive to be commercially viable, but that will no doubt change and the company is following their development closely.

The old adage ‘never waste a good crisis’, which has come to the forefront in these Covid-19 times, was also raised. Jakob fully subscribed to that saying. “We’ve been able to take the crisis and use it to turn around our thinking and practices.” The company is taking part in a broad set of discussions about the post-Covid economy – an opportunity to combine an accelerated green transformation with an economic stimulus to rebuild our economies.

Finally, certain issues create tipping points. Given Ørsted’s extraordinary transformation story, Jakob was asked if the company’s experience was being sought for insights into where the world needs to head?

“We offer ourselves as a dialogue partner to governments to say what we think could be the most potent acceleration measures when you look at green energy transformation.” He was hopeful that something good will emerge from these discussions.

As with the Ørsted transformation, while it is essential to have a clear vision and long-term strategy, it is important not to impose too tight deadlines but to give all stakeholders the time and space to accept the situation analysis first and then embed the vision.