Posted on in
LATEST INSIGHTS

OUR NEW GLOBAL STUDY FINDS THAT BANKS HAVE A CHANCE TO REPAIR THEIR REPUTATION. WILL THEY USE IT?

The collapse of the investment bank Lehman Brothers on September 15, 2008 turned what was until then a US financial crisis into a full-blown global meltdown that would later be referred to as the “global financial crisis” or more dramatically as the Great Recession. In the ensuing months and years things got worse, and following taxpayer-funded bank bailouts around the world – people started questioning the role and integrity of banks and bankers worldwide. This evolved into a serious and unprecedented breakdown of trust between the public and the financial industry, evidenced by countless headlines and studies ever since.

This year, Caliber and the EACD conducted a study aiming to find out whether trust in the sector was being restored, and if so where and how. We wanted to get a better understanding of the dynamics of the reputation of the financial services sector among the public worldwide: What drives it? How does it impact the sector’s performance? How does it factor into the other forces currently shaping the financial industry, like issues of governance and data privacy, and competition from FinTech? And most importantly – what should firms focus on as they continue to work on repairing the relationship between society and the financial sector?

The study included around 4.000 interviews conducted across 13 different countries (China, Brazil, USA and 10 European markets), and resulted in over 13.000 evaluations of 124 financial institutions in total. The results were partly expected – but mostly surprising. We found that the overall reputation of banks and insurance companies worldwide is in fact not as bad as one would imagine judging by the continuous negative headlines we have all been exposed to in recent years. Most interestingly, we found that what determines people’s perceptions most is not where they live, but how old they are – with young people worldwide tending to trust and like banks more than older people do. Interestingly, younger people seem to give the financial sector the benefit of the doubt. This presents the potential for a brighter reputational future for the industry, if it does the right thing. But the question remained – what is in fact the right thing? 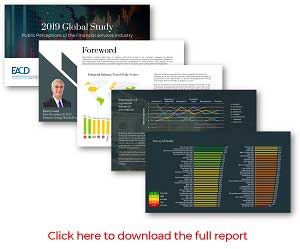 The study dug deeper into people’s perceptions of banks and insurance companies: what they think of those companies’ products and services; whether they see them as innovative and responsible in their behavior; how they assess their leadership and differentiation; and to what extent they see them as authentic and relevant. We also explored people’s intentions to buy or recommend services from the financial institutions included in the study, or even work for them. We then conducted a series of driver analyses to identify what perceptions would drive such behavior – across different countries, age groups and company types. These analyses showed, as expected, that different things matter to different people when it comes to building trust and loyalty. But they also showed some interesting similarities: for example, for almost all people in almost all countries, integrity was of utmost importance, while innovation was considered almost universally as unimportant. This was a very surprising finding given that the financial industry these days seems nearly obsessed with communicating its innovation to fight off the threat of FinTech. But it seems this has less impact on the public, who prefers to understand better how banks and insurance companies behave, what they stand for and what makes them interesting and different.

As it turns out, doing the right thing – especially when it comes to the most important future audiences consisting of Generations Z and Y – means becoming more clearly differentiated, being authentic, demonstrating integrity and having compelling services. In other words, banks and insurance companies must ensure and continuously prove that they are driven by a unique purpose. As such, they can continue rebuilding trust, affection and overall reputation. And with that, greater preference, loyalty and advocacy will follow. These results are encouraging as they suggest that not all is lost in the relationship between societies and the financial sector. The question is – can the sector rise to this reputational challenge?

Despite frequent news that may lead us to think otherwise – the financial sector has not completely lost public trust, and is indeed doing better than expected. But much more work is needed if it is to become once again a bastion of credibility and legitimacy, supported by societies and individuals the world over.