Posted on in
LATEST INSIGHTS

HARNESSING THE POWER OF CORPORATE COMMUNICATIONS TO ADVANCE THE SDGS

Are organisations genuinely using the communications framework offered by the United Nations Sustainable Development Goals (SDGs) as a way to find solutions for a better future, or simply as a superficial public relations exercise? The 17 Goals were developed to engage the private sector in solving the world’s most pressing challenges and are now widely used in corporate communications. But to what extent have companies and organisations been successful in embedding the SDGs into their narratives?

Speakers and participants gathered at the EACD Forum in Geneva to discuss the challenges and opportunities for advancing the SDGs. Panellists from the World Heart Federation (WHF), The New Humanitarian, ABB Power Grids and DSM shared practical examples of what has worked in their organisations.

A study developed by Leidar for the EACD Forum, reveals that Geneva-based companies and organisations have progressed in acknowledging the SDGs in their communications over the last three years. Yet they only carry out a limited amount of measurement and reporting on the SDGs, with only 34% of companies measuring their progress against targets, and 57% of organisations. This is a concern because it suggests that business and civil society are largely not holding themselves accountable to their SDG commitments.

Panellists and participants agreed on the need to work together across organisational functions to integrate the SDGs fully into the corporate agenda, and on the pivotal role that communications can play to demonstrate ‘real’ action and purpose.

EACD Forum in Geneva: Corporate communications in the light of the SDGs

The role of corporate communications is complex and ever evolving amidst a faster news cycle and growing stakeholder demands. Over 50 senior communications practitioners gathered at the EACD Forum in Geneva for an interactive discussion on how business and civil society can use the communications framework enabled by the United Nations Sustainable Development Goals (SDGs).

A study developed by Leidar for the EACD Forum, reveals that Geneva-based companies and organisations have progressed in acknowledging the SDGs in their communications over the last three years. Yet they carry out a limited amount of measurement and reporting on the SDGs, with only 34% of companies measuring their progress against targets, and 57% of organisations. This is a concern because it suggests that both business and civil society are largely not holding themselves accountable to their SDG commitments.

Various questions and remarks were raised by panellists and participants, leading to an insightful conversation. It was apparent that advancing the SDGs through corporate narratives is not an easy task and that there is no ‘one size fits all’ solution.

Speakers shared their practical experience of integrating the SDGs in corporate communications, highlighting challenges and opportunities. Participants then engaged in small group discussions on the topic and were able to share their comments with panel members following this.

Borjana Pervan, Director of Communications at the World Heart Federation (WHF) began by saying that there was more potential to use the SDGs in communications. She spoke about the strength of humanising stories on the Goals so that audiences can relate to them in a tangible way. Borjana used an example from the field of when she realised that the most effective way to get a message across on child labor was to talk about the lives of two children affected by it.

The importance of telling stories in a human way for authentic impact was echoed by Sarah Noble, Director of External Relations, at nonprofit news organisation, The New Humanitarian. She spoke about the SDGs from a media perspective and added that the role of communications is to ‘get real’ and show what the SDGs mean for the public and decision-makers.

Roland Sladek, Group Vice President, Head of Global Communications at ABB Power Grids revealed the shortcomings of operationalising the SDG framework, explaining that it lacks a mechanism to hold business accountable for their commitments. He mentioned that the SDGs risk becoming a box-ticking exercise if they aren’t accompanied by concrete and ambitious measures.

Inge Massen-Biemans, Global Director at DSM, global nutrition, health and sustainable living company, spoke about how the SDGs have become an integral part of DSM’s content strategy. The key to the company’s success in its communications has been in its approach to advance the SDGs through its core business activities. DSM has made it clear that profit and purpose come hand-in-hand for the company. The turning point for DSM was its new strategy, in which it articulated that the SDGs together with core business competencies would form the basis for growth. DSM is now focusing on delivering on the five SDGs that it believes have the most impact on its business, which has helped it to be credible in its communications.

There was agreement in the room that further integration of the SDGs into the corporate agenda will require greater internal collaboration and a more holistic corporate communications role that encompasses areas such as marketing, sales and public affairs. Embedding the SDGs within the communications function presents an opportunity for the role to become more central and mission critical to the business. This marks an exciting turning point that could very well re-define the profession and lead to purposeful action and change. 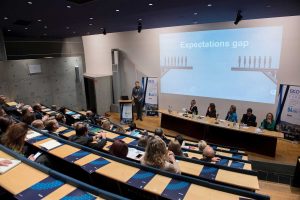